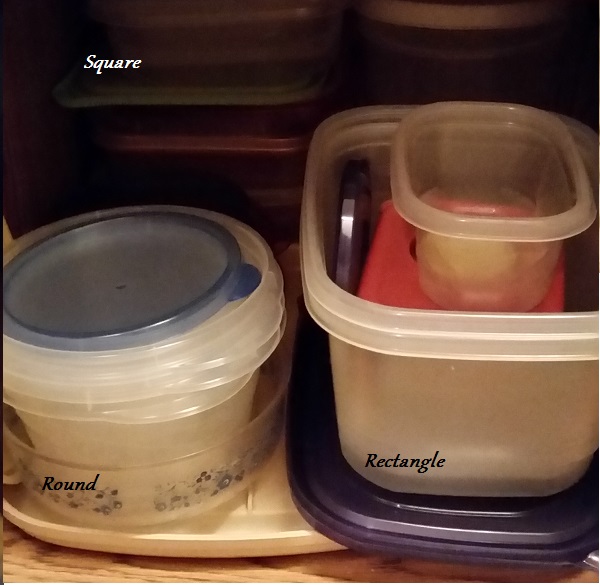 What's the worst cabinet in most people's kitchen? From my experience its the plastic ware. (People still call it Tupperware, though most of what's in there isn't Tupperware.)

Your mission is to organize your plastic containers...

Stack them in neat stacks. Stack the square ones, the round ones, and the rectangle ones. Put the lids next to or under the stacks. Wa-La!

And all those butter containers and such you've been saving? Throw them in the recycle bin. Anything that doesn't match up? In the bin!

If you're one of those who are saving them to send food home with people, put them in a box or bag  in the storage room or somewhere. Stop letting them take up valuable space in your cabinets every day.

Now the real secret is to take the 2 seconds to put them away correctly the next time you use them, right?

If you've been trying to get away from plastic altogether because of the health risks, Pyrex is great! I have this set -

Its a great gift idea too.

The same principle applies for storage. All the rectangular ones in one stack, an all the round in another.

You know the other nice thing about Pyrex? It doesn't get that greasy film that's so hard to wash off, an it doesn't stain. It does make your lunchbox a little heavier though.

This post does include an Amazon Affiliate link. If you buy something thru that link, I will receive a small commission.